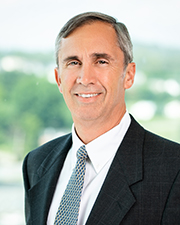 Dr. Patterson has served as a general surgeon in Greeneville since 1995, when he joined Greeneville Surgical Associates. In 2012, he joined Laughlin Medical Group, where he held both clinical and leadership roles, including Chief Medical Officer.

He received his medical degree from the University of Tennessee Health Science Center’s College of Medicine in Memphis, and he completed his internship and residency at East Tennessee State University. He is board-certified by the American College of Surgeons.

Dr. Patterson is an armed services veteran, serving in the United States Army from 1978 through 1983 and the Army Reserves until 2000.